The Marriage of an Esteemed Supreme Healer, a Noble Ruler Chapter 1241

“That’s…” She looked at Rong Xiu in shock.

“That’s the notes left behind by the sword’s creator,” said Rong Xiu with a smile. “It took me quite the effort to find it.”

Although Rong Xiu had said this in a joking tone, Chu Liuyue understood how difficult it must’ve been for him to find the book. The academy had millions of books in its collection, so one could just imagine how much time and effort were needed to locate that one book. Besides, the academy had spent great effort to retrieve the Xuan instrument, so it was only natural that everything related to it was kept strictly.

I can’t believe he managed to get it… Chu Liuyue could feel the thick, heavy, and rough pages of the book in her hands. Her heart stirred. “This book… I doubt the academy would hand it over just like that, right? How… did you manage to get it?”

“Without the Yuan instrument, the notebook itself is meaningless. It’s only considered a treasure when it’s in your hands. It’s pointless for them to keep it, so it’s not as hard to obtain as you think.”

Despite what he said, Chu Liuyue knew that things weren’t so simple. But since it was clear that Rong Xiu had no intention of sharing the details with her, she knew that she wouldn’t be able to get an answer out of him no matter what.

“I had to keep my promise of getting this book for you.” As Rong Xiu said that, he held Chu Liuyue’s face in his hands and kissed her glabella.

When his warm breath landed on her forehead, Chu Liuyue felt as if she was burning up. She looked up at him. “Rong Xiu…”

Her red lips parted in an attempt to say something, but she didn’t think that there was any word that could quite convey her feelings. This man has always been by my side, giving me everything I wanted. I believe only very few people in the world are capable of doing that, but he did just that. He has never boasted about how good of a man he is—it’s like he’s only doing what he should do. How rare of a husband he is.

When Chu Liuyue stretched out her arms to grab Rong Xiu’s clothes and pull him toward her, he cooperated and leaned down slightly to meet her kiss.

That kiss was incredibly soft and sweet, and it left both of them giddy with pleasure.

It took a while before they finally pulled apart from each other.

Rong Xiu then tightly held her in his embrace and rested his chin in the crook of her neck. “Is this a reward?”

His voice was deep, slightly hoa.r.s.e, and even carried a hint of confusion when he asked that question. It almost instantly made Chu Liuyue’s heart tremble when she heard it.

Chu Liuyue ended up going back to her room obediently because, according to a certain person, he couldn’t guarantee what would happen next if they continued staying together in that situation.

It was late at night, and her surroundings were all quiet. All that could be heard was the occasional rustling of the evening wind pa.s.sing through the forest, and that made the night seem extra lonely.

Chu Liuyue sat cross-legged with the notebook in her hands. She still felt as amazed as before even as she looked at it now. Her eyes carefully swept across the cover in great detail.

The strange golden pattern engraved on the sword sheath appeared stately and mysterious. The gold-blue hilt was carved into the shape of a dragon’s head, and its eyes were so dark that it seemed capable of swallowing someone when they looked into it. Further above it was a clean, smooth, round, and black handle that had a ta.s.sel dangling at the end.

“So this sword is somewhat a.s.sociated with the dragons…” Chu Liuyue muttered to herself. That explains why the Long Yuan Sword’s sword aura managed to fuse with it smoothly. Of course, Ancestor must’ve played a part in its success too.

With a mere thought, a stream of sparkling light appeared right in front of her, followed by the appearance of a longsword. Although it was just quietly floating in the air, the s.p.a.ce around it distorted a little.

This showed how tremendous its pressure was.

Chu Liuyue stared closely at the sword in front of her—it looked exactly the same as the one drawn on the notebook’s cover. It was just that the notebook—despite being well-kept—had become slightly yellowish due to it being too old, so it looked as if a grayish-yellow veil was covering the drawing. It was only when said sword appeared right in front of her that she could clearly sense its majestic aura, which seemed to have come from a distant time and s.p.a.ce.

Everything was so vivid.

She flipped open the notebook, and on the t.i.tle page were the words ‘Chi Xiao Sword’ written in a powerful handwriting.

Slowly and carefully, Chu Liuyue flipped through the entire book. When she finally finished the last page, she closed the book, closed her eyes, and let out a long breath.

It turned out that this sword’s former owner-c.u.m-creator was Elder Fan Bei. Back then, Elder Fan Bei, upon receiving a piece of precious sword core, was determined to refine the ultimate sword. In order to forge this sword, he went to Ancient Feather Abyss and stayed there for three whole months, calling on the lightning every day before he finally managed to produce it.

Unfortunately, he was dying by the time the Chi Xiao Sword was produced, having exhausted all his energy and power in those three months. Knowing that his days were numbered, he decided to take his heart’s blood and fuse it with the sword. Using his own life, he managed to turn the sword into a supreme Yuan instrument, but he died in the process of doing so.

Just like that, the Chi Xiao Sword fell into Ancient Feather Abyss before it could even emerge, and it stayed that way for years after. It wasn’t until recently—when there was chaos happening in Ancient Feather Abyss—that the elders of Ling Xiao Academy realized that the sword was about to emerge.

Many people actually knew that there was a Yuan instrument hidden within Ancient Feather Abyss. It was why the Golden Wings Sect and many other sects had sent so many people to try and get their hands on the sword.

Word out there was that the Chi Xiao Sword was a royal Yuan instrument, but it was actually a supreme Yuan instrument in reality. It was fortunate that Ling Xiao Academy managed to get it back in the end, so not many people knew the true grade of this Yuan instrument. Otherwise, it would become quite a problem for them.

Elder Fan Bei had kept a constant record of the Chi Xiao Sword’s forging process. The notebook contained every step of the process, as well as some of his thoughts. It was just a shame that he failed to include the usage method since he died as soon as the sword was produced. Hence, Chu Liuyue could only figure things out on her own based on the notes he had left behind.

That said, such a supreme Yuan instrument was highly intelligent in the first place. There wouldn’t be a problem for her as long as she was able to master it completely.

Chu Liuyue put the book away and looked at the sword in front of her. After taking a deep breath, she grabbed its hilt. 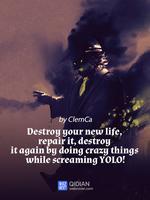 Destroy Your New Life, Repair It, Destroy It Again By Doing Crazy Things While Screaming YOLO!

Destroy Your New Life, Repair It, Destroy It Agai...