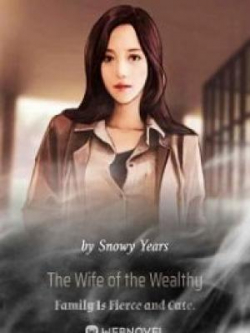 The Wife Of The Wealthy Family Is Fierce And Cute. Chapter 652 - Side Story Seven

Li Yan tilted his head and kissed Chu Luo’s forehead. “Next time, tell me where you’re going. I’ll go with you.”

The corners of Chu Luo’s lips curled up slightly as she nodded at him.

Beibei looked up at Li Yan, waiting for him to kiss her.

However, after waiting for a while and seeing that he didn’t move, she pouted and tugged at his clothes unhappily.

Li Yan looked down at her.

Beibei blinked at him with her big, gla.s.s-like eyes.

Li Yan pretended not to understand her.

Beibei was so anxious that her little face turned red.

Chu Luo reached out and kissed her forehead.

The university robot compet.i.tion was held at the University D robot research and development center.

When the eight universities were revealed under the cameras, all the science students and robotics enthusiasts in the world erupted.

Chu Luo said to Anya, who had followed her, “Wait for me in the audience. I’ll look for you after the compet.i.tion.”

Anya a.s.sured her, “Okay, we definitely won’t walk around.”

After saying that, she added, “Chu Luo, don’t worry. Blockhead and Li will come over later. I’ll keep a close eye on Beibei during this time.”

Chu Luo nodded and led her teammates to the compet.i.tion waiting area.

Today’s compet.i.tion was divided into two rounds—in the morning and afternoon.

The first round was a robot display by the various teams. The second round was making a robot on the spot.

Every school had taken out a secret weapon today, and the displayed robots they brought were extremely exquisite. The people behind the screen held their breaths in excitement, afraid that they would miss out on something.

Beibei and Momo, who were sitting in the audience, were also watching seriously. The two kids were discussing as they watched.

After about half an hour, Beibei suddenly quietly tugged at Anya’s clothes.

Anya turned to look at her. “Darling Beibei, what’s wrong?”

Beibei stood up and whispered in her ear, “Auntie Anya, I want to go to the toilet.”

Anya nodded and said to her, “I’ll take you there.”

After saying that, she turned to ask Momo, “Darling Momo, do you want to pee?”

“No.” Momo stared at the compet.i.tion arena without blinking.

Anya knew that the little fellow liked robots, so she said to the bodyguard, “Watch Momo.”

Then, she held Beibei’s hand and walked towards the bathroom.

The bathroom was a little far from here, so Anya asked the students here before finding it.

Anya sent Beibei into the bathroom and said to her, “Darling Beibei, Auntie will be at the sink. Come out after you’re done.”

Beibei raised her short legs and entered a cubicle.

However, just as she finished peeing and pulled her pants up, she felt something above her head.

When she saw what it was, she was about to scream when she lost consciousness.

When Beibei woke up, she saw a very handsome man with a faint smile on his face.

The man’s voice was also very pleasant and gentle.

Beibei blinked a few times, then asked blankly, “Who are you?”

“My name is Nangong Yi.”

Nangong Yi looked at the exquisite and beautiful little girl in his arms and was in a daze. He asked, “Are you Chu Luo’s daughter?”

“How did you know?” Beibei suddenly remembered that she had been taken away by a bad person. He suddenly sat up in his arms and looked at him warily. “You big baddie, if you take me away, my parents will definitely come and save me.”

Nangong Yi looked at the suddenly furious baby and the smile on his face deepened. He gestured to Beibei with his eyes. “I didn’t capture you. To be exact, we were captured at the same time.”

Beibei didn’t quite believe it, but she still looked around.

She then realized that there was nothing in the room they were in. Moreover, Nangong Yi’s hands and feet were tied.

She looked at herself again and heaved a sigh of relief when she realized that she wasn’t tied up.

Beibei looked at him, thinking that they were all pitiful people who had been caught by baddies. She decided it was okay to tell him her name. She said, “My name is Li Yuge. You can call me Beibei.”

“Beibei.” Nangong Yi called out to her and asked, “Are you hungry?”

Only then did Beibei feel hungry. She rubbed her stomach and nodded at him. “Yes.”

Nangong Yi asked her again, “Did your father or mother teach you how to use a knife?”

“My uncles taught me.”

“Alright, I have a soft knife with me. Take it out and help me cut the rope on my hand.”

Beibei nodded and got up from the ground. At Nangong Yi’s signal, she pressed a spot on his belt and saw a soft knife sticking out.

Worried that she would accidentally cut herself, Nangong Yi asked her to take it out while teaching her how to use it.

After Beibei took out the soft knife, she went behind Nangong Yi and cut the rope that tied his hands.

As soon as Nangong Yi’s hand was free, he took the soft knife from Beibei’s hand and cut the rope on his leg. He stood up and picked her up. “Beibei, hug Uncle’s neck tightly. Uncle will take you out.”

Nangong Yi had a fresh and elegant smell on him. Beibei liked it very much, so she nodded at him and hugged his neck tightly.

Nangong Yi carried Beibei to the door. After whistling, they heard the door open.

Beibei was a little worried, so she whispered to Nangong Yi, “Uncle, are there bad people outside?”

Beibei was still too young to understand why Nangong Yi could be kidnapped despite having a robot.

Actually, Nangong Yi had done it on purpose. He had known that Chu Luo and the others were looking for people from the a.s.sa.s.sin organization, wanting to capture them all in one go.

Today, on the way to University D’s robot research and development center, he had seen someone knock Beibei out and want to take her away, so he had schemed to get those people to bring him along.

This way, his skills could protect Beibei and also help Chu Luo and the others.

The door was quickly opened by the robot.

When Beibei saw the robot outside the door, she said to Nangong Yi happily, “Mommy made such robots too.”

Nangong Yi smiled at her. “Beibei’s mother must be an incredible person.”

“Of course. Mommy is the best.” Beibei nodded heavily, her little face filled with absolute pride.

Nangong Yi was amused by her expression. After laughing, he said to the robot, “Go get us something to eat.”